By A Childs Place on September 22, 2015 in Uncategorized 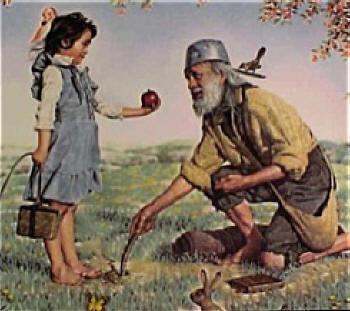 One of America’s greatest legends is about Johnny Appleseed, an apple farmer who lived about 200 years ago. The fact is, there really was a “Johnny Appleseed” but his real name was John Chapman. His dream was to produce so many apples that no one would ever go hungry. Although legend paints a picture of Johnny as a dreamy wanderer, planting apple seeds throughout the countryside (click here for a coloring sheet), facts reveal he was a very good businessman.

When John was eighteen years old, he headed west from Massachusetts, following the steady stream of immigrants. John continued moving west to Pennsylvania. From there he traveled into the Ohio Valley country and later, Indiana. He kept ahead of the settlements and each year planted apple seeds farther west.

He always carried a leather bag filled with apple seeds he collected for free from cider mills. Legend says he was constantly planting them in open places in the forests, along the roadways and by the streams. But facts show he created many nurseries by carefully selecting the perfect planting spot, fencing it in with fallen trees and logs, and returning at regular intervals to repair the fence, tend the ground and sell the trees. He was soon known as the “apple seed man” and later he became known as “Johnny Appleseed”.

He made friends with many Indian tribes and was known to have learned many Indian languages well enough to converse. He lived on food provided by nature and he never killed animals. Though he looked poor, he was not a poor man. He had more cash than he needed from selling his apple trees and land. He never used banks and instead had an elaborate system of burying his money. He would rather trade food or clothing for his trees than collect money. It was more important a settler plant a tree than pay him for it.

In 1842, Johnny made his last trip back to Ohio after spending 50 years walking throughout the countryside. In 1845, he died of pneumonia at the age of seventy-one. Legend says it was the only time he was sick in his whole life. That’s where the phrase “An apple a day keeps the doctor away” comes from.

About A Childs Place

View all posts by A Childs Place →
Back To School Means Time To Get Organized!
5 Tips to Stay Healthy This Holiday Season

A Child's Place at the Ranches